Sit or stand around 1.50m from your screen, cover one eye with your hand and try to read the letters from the bottom up to the last line at the top. Repeat the test covering the opposite eye. 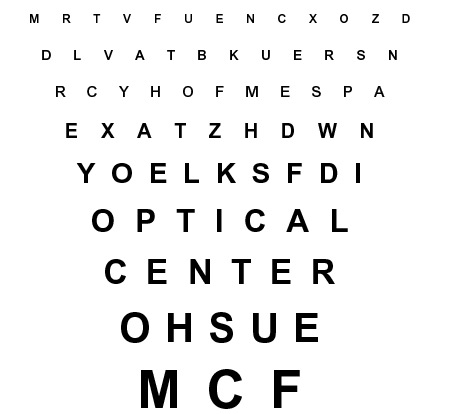 Myopia: Commonly known as being nearsighted and shortsighted, is a condition of the eye where the light that comes in does not directly focus on the retina but in front of it. This causes the image that one sees when looking at a distant object to be out of focus, but in focus when looking at a close object.

Hyperopia: Commonly known as being farsighted , being longsighted, or hypermetropia, is a defect of vision caused by an imperfection in the eye (often when the eyeball is too short or the lens cannot become round enough), causing difficulty focusing on near objects, and in extreme cases causing a sufferer to be unable to focus on objects at any distance. As an object moves toward the eye, the eye must increase its optical power to keep the image in focus on the retina. If the power of the cornea and lens is insufficient, as in hyperopia, the image will appear blurred.